In the old days, printed applications had to be folded by hand. In time, machines were invented to facilitate and speed up this repetitive task. 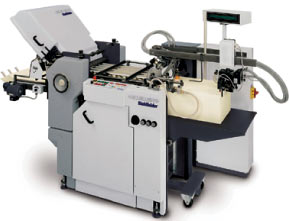 A variety of different folds are now being accomplished on many different shapes and sizes of printed materials using sophisticated machinery.

Paper and other substrate products can be folded either in-line during the production of the printed piece or off-line on folding machines ranging from free standing table-top folders to high speed production floor models.

Typically, there are only two basic types of folds: parallel and right-angle.
Products containing parallel folds consist of folds that run parallel to each other. Right-angle folds are folds that run perpendicular to each of the preceding folds.

Generally best suited for large quantity products, folding inline may result in lower press speeds, however the reduced speeds are accepted for the economies gained. It eliminates the additional cost of folding the product with an offline process.

In-line folding is limited to only a few types of products and a few types of folds. Off-line folding or bindery folding provides the greatest number of different folds on high-speed machines referred to as knife folders, buckle folders or combination folders. 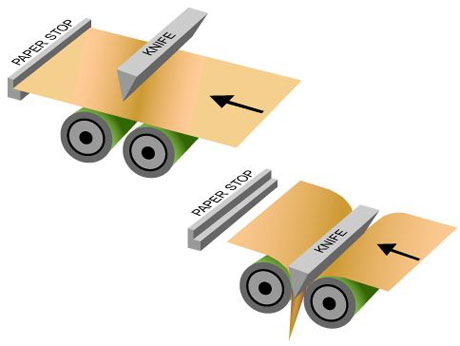 A knife folder is used primarily for booklet work due to the accuracy that can be achieved when producing right-angle folds, keeping the pages in close registration.

A blunt steel blade pushes the internal part of the paper at the desired location between two rollers to create the fold in the material. The knife folder is a slower speed folder, but as stated, more precise on the folds.

A buckle folder, the most common type of folder, uses a set of guides and plates with a “backstop” to buckle the paper and create the fold. The document enters through a set of rollers and into a plate where the paper strikes a backstop as shown in the illustration below.

Â
When the paper strikes the backstop, it buckles and is forced downward and into a set of nip rollers.
Â
The nip rollers grab the sheet at the buckle and pull it through, compressing a fold into the sheet as it passes through the rollers. If several folds are desired, then the material is sent into another plate to repeat the process.

The paper grain direction has much to do with the quality of the fold. Paper that is folded parallel with the grain of the paper will fold much more cleanly.

A cleaner fold is produced because the paper fibers (grain) are running in the same basic direction as the fold. Only a few of the fibers provide any resistance to the folding action, which results in a high quality fold. 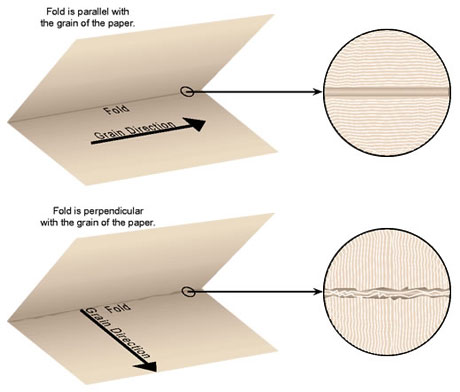 When a fold is applied perpendicular to the grain of the paper, the resulting fold may have a ragged appearance.

A ragged fold is produced because all of the fibers are folded at one time creating resistance to the folding action. The ragged appearance of the fold is especially noticeable when folding heavy stocks.