Even in today’s digital age of social media & virtual presence, there is no substitute for a custom business card that is creative & beautifully printed.

Choose between coated or uncoated paper stocks. We can print standard, square or a custom business card. Fine Print NYC can deliver time sensitive projects on demand. Contact Us Anytime • 212.619.5446 • 212.883.8088

To get things moving, please send over all project specifications: size, colors and sample artwork (a low res file will be fine) to inquiries@fineprintnyc.com, so we can better assess your project and prepare a formal estimate for your review.

What is a business card?
A business Card is a networking/marketing tool with contact information for an individual, business or division.
What are the most common business card sizes?
The three most requested sizes are 3.5" x 2", 3.35" x 2.17" and 2.25" x 2.25".
What is the minimum order for a custom business card?
Our minimum order is 500 business cards per design. For cost comparison, we also give pricing for 1,000 units.
Do you have a minimum order for multiple lots/names for business cards?
Yes, if you're producing 10 or more unique lots at once, the minimum order is 250 business cards per person.
Can you produce a press sample before printing all of my business cards?
Yes, a press sample can be produced prior to final production. However, we will have to charge accordingly for set up/press time. A 50% credit for the press sample will be applied to the final invoice, if the project is officially approved for production.
Can I see a digital proof before final production of my business cards?
Yes, our pre-press department will provide two rounds of digital proofs for approval prior to final print production.Please note, any additional digital proofs will be billed accordingly.
What is the standard turnaround time for business cards?
Once final proofs are approved, standard production time is 5-7 business days.Please note, production time may change depending on our current press schedule and how many specialty options have been selected.
Can I pick my own design/image for custom business cards?
Yes, if you provide high resolution artwork, we can print your custom design.
What is the best resolution to submit my artwork?
The preferred format for final artwork files/logos is a vector EPS file, with all type converted to outlines with a minimum resolution of 300 dpi. Any resolution lower will make the logos/images look pixelated or blurry. Please make sure to include a packaged InDesign file that includes all typefaces/links.
Do you offer a variety of paper stocks/materials for business cards?
Yes, we offer are a variety of paper stocks/materials. Options include gloss, matte, coated, uncoated, silk, linen and texture papers/materials.
What is duplex/mounting on a business card?
A duplex business card is when two paper stocks are pressed/fused together to create a double thick card.
What are the benefits of a duplex business card?
Certain specialty printing processes (embossing, letterpress, foil stamping) leave an impression (logo/text) when pressed into the paper and a duplex card will hide this impression to create a smooth and flawless finish.
Do you offer specialty printing business card options?
Yes, we offer letterpress, embossing, foil stamping and thermography specialty options.
Can I color match to a specific Pantone color for my business cards?
Yes, we can match specific PMS colors for your brand/logo.
Do you offer round corners or custom die cut business cards?
Yes. Our minimum order is 500 cards per unique design.
Do you offer edge printing or edge foil stamping?
No. Edge gilding or printing is not a service that we offer.
Do you offer metal or steel business cards?
No. This is not a product that we offer.
Do you offer laser cut business cards?
No. This is not a product that we offer.
Can I supply my own paper for you to print my business cards?
No. We cannot run any paper through our press that has not been sent directly from our paper-house. If there is a particular paper stock you are looking for, we can place a custom order for your cards.
My order is a rush, is a 24-48 hour turnaround possible for custom business card printing?
Please contact us as soon as possible, so we can check with our production department. Please note, rush turnaround will be billed accordingly.
How can I make a payment for my business cards?
We accept all major credit cards and company checks. Please note, a job ticket must be created and payment is required before we can start proofing/final production.
Can you ship paper/printed samples for my review?
Unfortunately, we can not send out paper/printed samples without a job ticket being generated into our system.
Can I schedule an appointment to review sample/paper stocks?
Yes, we can schedule an appointment for you in our Jersey City showroom/production facility. There you can review various printed samples, paper stocks, and consult with a production specialist. Unfortunately, we do not schedule production appointments in our Manhattan corporate offices.

Embossing is a specialty that produces raised or sunken effects by pressing a logo, headline or brand into paper stock with a metal die.

Letterpress is an ancient form of specialty printing, where extra pressure is applied, leaving a subtle impression of the chosen graphic or wordmark.

Thermography is a form of printing that utilizes heat-sensitive ink which expands on the surface for a classic, tactile finish.

Foil Stamping or Hot stamping is a specialty printing process that adds a metallic shine, using a variety of colors in both glossy & matte finishes.

Paper weight and thickness are by far some of the biggest concerns our clients have. Some people are trying to avoid printing a flimsy card while others are more concerned with the card stock being too bulky. With the many paper options available, our standard cardstocks begin at 80# (pound) weight to ensure durability and increase from there: 100# (pound), 120# (pound) and 165# (pound).

Heavier weight cards are produced by layering/gluing two separate paper stocks together, more commonly know as the Duplex or Mounting process which can yield a weight of 240# (pound) to 260# (pound) cards.

Going with the right finish can be just as important as selecting the right paper stock and weight. We offer a variety of finishes to suit all tastes/applications and can help you choose the perfect coating for your cards.

Matte Varnish: Non-reflective coating flattens images and softens colors while making text more readable.
Gloss Varnish: Brightens and saturates color and increases contrast with a reflective sheen.
Soft Touch Aqueous: Also known as “velvet touch”, the coating is applied with a roller, which leaves behind a plush, velvety texture.
Gloss UV: Coating is exposed to ultraviolet light which hardens the coating and provides the highest gloss available for printing.

A Brief History of Business Cards 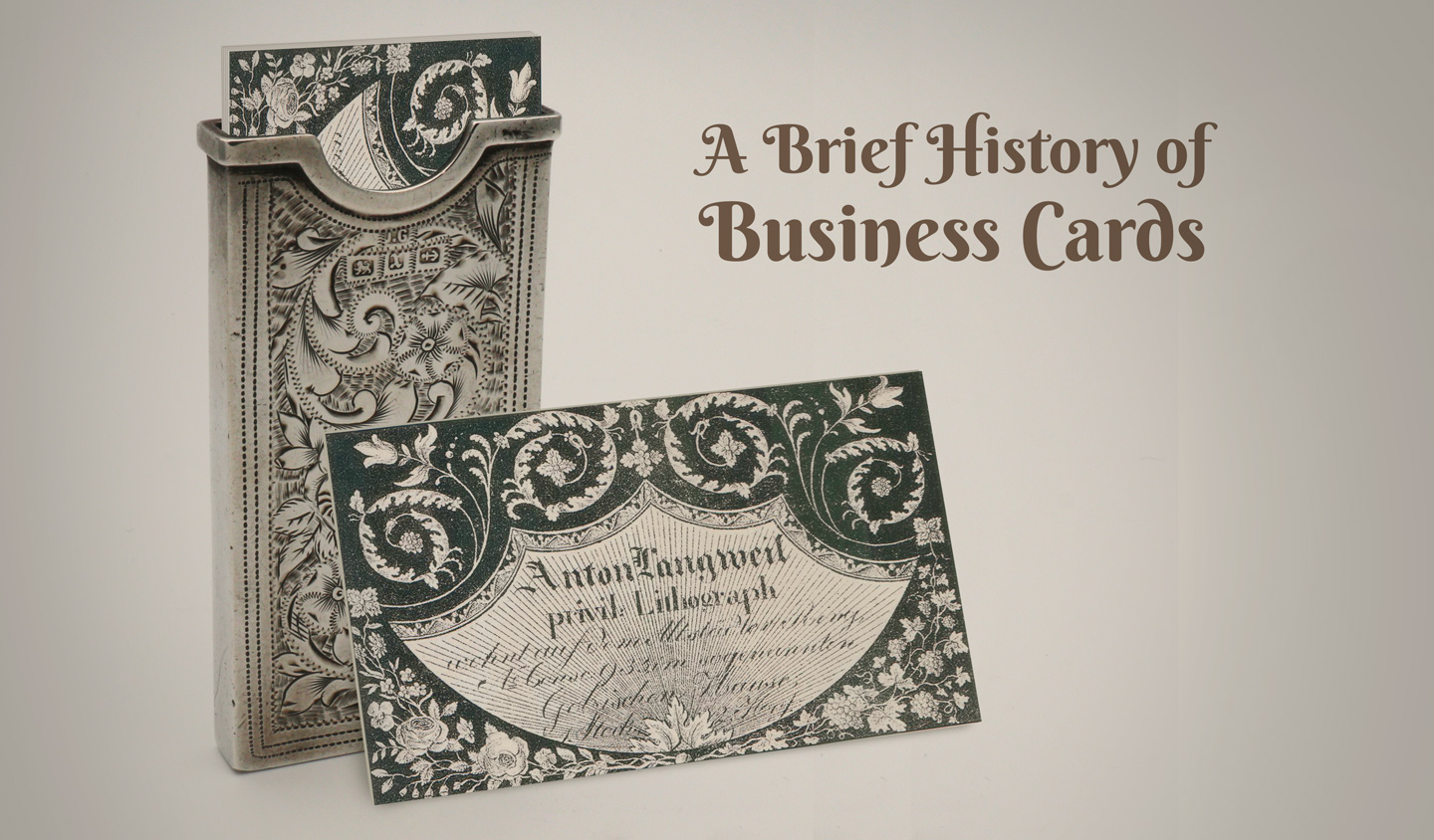 While business cards form an integral part of modern day self-promotion, they are also the product of a rich and fascinating history which spans centuries, once again proving the timeless nature of this simple yet effective form of building professional relationships.

The earliest form of business cards first surfaced in China during the 15th century as "Fǎngwèn kǎ" or "visiting card". Merchants and aristocrats used them as a screening technique for meetings. If you wanted to schedule a visit with someone influential, you would send them a visiting card which usually contained a graphic, along with a brief biography/sales pitch. This way the other party could review a list of cards and determine which people they would agree to meet with.

After centuries of trading with the East, the practice of visiting cards would expand to europe. From 1643 to 1715 they became the defacto method of announcing royalty. Upper class socialites would soon adopt the practice, creating highly personalized and ornate cards to be used at social functions and gatherings. A design race ensued, with individuals trying to out do each other and employing the use of gold engraving and elaborate typography to represent themselves.

Eventually this practice would evolve as a form of advertising to promote local businesses. In cities that were rapidly expanding, one of the biggest challenges was directing potential clients to a specific address. Many of these cards would include detailed maps and instructions to guide potential clients and sometimes market one's services. Even with this novelty, visiting cards for the elite would still prove to be a dominant practice well into the 19th Century. Upon visiting a nobleman's house cards would be left on silver trays and serve as a formal registry of guests.

As the working class grew, visiting cards and trade cards began to merge into an early prototype of the cards we know today. Thanks to the upward mobility afforded by mass production and capital growth, you didn't have to be a business owner or socialite in order to carry one. ALl you needed was ambition and a desire to network. This change in demographic was met with some resistance from the upper classed which had created, and still observed the tradition, but it would seem no matter how powerful or wealthy one may be - the march of progress can't be bought or bargained with.

Today, whether they are designed as simple black ink on white card stock for a humble tradesman, or with elaborate colors and specialties for CEOs, business cards continue to prove a popular solution for personal promotion. One might have expected their use to wane in this hyperconnected age of information, emails and social media. But the truth is, thanks to innovations in printing, they are more affordable and popular than ever - proving that there's still a place for a tangible calling card that caters to people from all walks of life.